Self-driving cars will change the world – and banking

These days it seems the news is full of stories about autonomous driving.

The other day I came across the video below.  It shows what can happen when an unprepared person is placed behind the wheel of a self-driving car.  In this case, the car was a Tesla in autopilot mode and the driver was the owner’s mother.

The video highlights what can happen when standard expectations confront new modes of behaviour associated with technological innovation.  In this case the disjuncture is hugely discomforting for the lady sitting in a Tesla Model S.

But Tesla is not alone in developing self-driving cars.

The most well-known, of course, is Google’s Self-Driving Car Project.

However it’s not just car makers that are in on the act.  Even a two-minute internet search will reveal a range of non-traditional companies wanting to disrupt the existing model of driving including:

The potential impact of these developments is profound.

The car industry is about to be transformed

For a start, there’s the likely direct impact on the car industry…

A report last year by Boston Consulting Group predicted that self-driving cars may account for a quarter of global car sales by 2035.

And just three months ago McKinsey&Company came to even more transformative conclusions forecasting that, under certain conditions, nearly 100% of cars sold in 2035 will be what it terms ‘Conditionally autonomous’ (ie autonomous except that the driver may take occasional control).

Source:  McKinsey&Company Disruptive trends that will transform the auto industry

But it was an analyst’s report last year by Barclay’s Bank Research titled ‘Disruptive Mobility’ that highlighted the consequential impact of these trends.  The report predicted a large uptake in self-driving cars (similar to that of BCG and McKinsey) but then went on to identify the effect of this change.

What?  Vehicle ownership down by 50%?  Car sales down by 40%? How could this happen?  Wouldn’t we all just be riding around in cars of our own, freaking out like Bill’s mom in the video?

While the big driver behind autonomous driving initiatives is the potential safety benefit (eg Volvo’s ‘Intellisafe’ program ), the more far-reaching potential impact of driverless cars is that it points to the creation of a new driving model:  driving-as-a-service , or more commonly, car-as-a-service (CaaS).

The Barclay’s report identifies the impact of this and predicts the emergence of four vehicle types, of which the last three are different versions of CaaS.

This points to a potential massive change in how we use vehicles.  Instead of a large number of independent cars occupying garages, driveways and roads, each owned and operated by individuals, fewer cars will be operated and shared by groups of people.

I’m somewhat embarrassed to admit this but upon my eldest daughter turning 18, our family recently expanded from a two-car family to a three-car family.  Why do we need three cars?  At the moment, it’s all about convenience. I’m going here; my wife is going there; our daughter needs to be elsewhere; and that’s before we even consider the impact of the other kids and weekend sport…  But a self-driving Family Autonomous Vehicle (FAV) would allow us to share a vehicle:  once it was used by one family member it could be sent off to be used by another, and another, and another.

However, the extension of this model to wider groups of people is where the real potential lies for transport efficiency and convenience:

It’s not hard to see why Uber and Lyft are fascinated with the prospect of self-driving cars.  Their business model has been built on disrupting existing industry practice and removing the involvement of taxi company dispatchers.  Instead, users are put in direct contact with the providers of transport services via an app.

The advent of self-driving cars has the potential to remove not just the dispatcher from the scene but also the driver, further driving down costs.

Already we are seeing a reduction in the number of young people getting a drivers licence .  The advent of CaaS points to a future, potentially within our lifetimes, where it may no longer be important for individuals to know how to drive at all.

CaaS – its impact on car manufacturers and the world economy

The potential impact of these changes on car makers and the wider economy is daunting.

A shift to CaaS will massively disrupt existing businesses involved with every aspect of transportation, especially if SAVs and PSAVs become the common/dominant mode of vehicle access.  This is because under these models, vehicle ownership, operation, fuelling and maintenance will all be aggregated and centralised.

Areas of the industry potentially open to disruption include:

The direct impact on auto manufacturers would be enormous.  They would need to downsize dramatically. The Barclays report’s author, Brian Johnson has written:

“GM and Ford would need to reduce North American production by up to 68 percent and 58 percent, respectively.”

To put this in context, were GM and Ford to reduce their production by the extent envisaged by Johnson, the ensuing downturn in North American auto sales would roughly equate to the impact of the GFC.

It’s hard to imagine from our current perspective, but the advent of self-driving cars and CaaS could thus potentially lead a massive downturn in worldwide auto manufacturing, employment, investment and overall economic output.

CaaS – its direct impact on banking

For banks the potential impact is challenging, not just because of the potential scope of the transformation, but also because of the anticipated timing.  No-one is clear on when these pressures will start to have a significant impact, although the advent of Uber, etc and the impact this is having on the taxi industry is a portent of things to come.

In the medium term, banks must obviously consider the impact that these changes will have on the viability of their exposure to a range of business categories associated with cars and transport:

Offsetting this, of course, will be the opportunity for investments in new businesses associated with emerging technology and businesses that leverage new driving models.

A more fundamental issue though, is the potential downturn in business associated with car/auto loans that can be anticipated from CaaS.

If CaaS becomes common, then it is likely that vehicle ownership and operation will be managed through centralised arrangements.  Uber already leases cars to UberX drivers.

It’s therefore not hard to imagine a scenario in which:

In this scenario, fleet financing will be handled handled centrally, not through car loans to individuals.

Even the family-focused version of CaaS (FAVs) envisaged by the Barclays report, is not immune from this trend.  FAVs are just a ‘more tightly’ utlised version of SAVs (and even these are potentially usable within a wider framework).

Brett King has written of a scenario in which a FAV:

FAV’s thus, too, lend themselves to aggregated financing and management arrangements.

The potential impact of these changes on financing organisations heavily dependent on current models of independent car finance is obvious.

CaaS – its indirect impact on banking

More broadly, though, I think the potential advent of CaaS points to the well-recognised broader trend that is impacting just as much on banks and banking as cars and driving:  the development of platform-based digital and ‘as-a-service’ solutions.

Digital disruption is extending to every industry vertical and the same approach is evident in each case:

Within banking these same pressures exist, leading to the emergence of new business models built on:

The lessons for banks in the potential disruption brought about by self-driving cars?

Last year, Elon Musk was widely quoted when he envisaged a future in which owning a car would be like owning a horse.

“[In 15 to 20 years] any cars that are being made that don’t have full autonomy will have negative value. It will be like owning a horse. You will only be owning it for sentimental reasons.”

All of this points to one potential positive impact which I’ve failed to mention so far.  Just as I don’t have to (thankfully) give my kids riding lessons, perhaps it’s possible to imagine a future not too far away, in which dads will not have to teach their kids the time-honoured practices of giving way, hill starts, defensive driving and reverse parking. 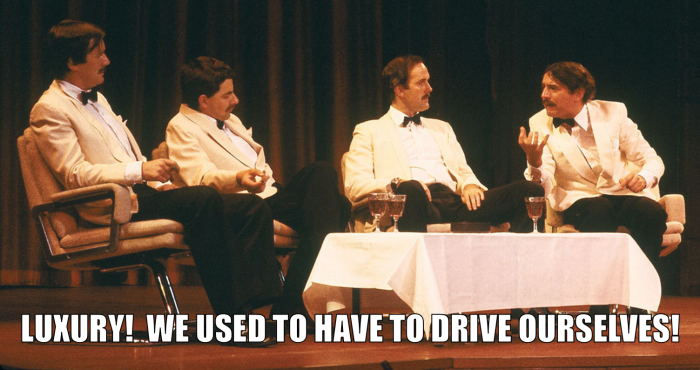 (With apologies to Monty Python)